Is there a relationship between the bombing of Lebanon and the inauguration of the World’s largest strategic pipeline, which will channel more than a million barrels of oil a day to Western markets?

Virtually unnoticed, the inauguration of the Ceyhan-Tblisi-Baku (BTC) oil pipeline, which links the Caspian sea to the Eastern Mediterranean, took place on the 13th of July, at the very outset of the Israeli sponsored bombings of Lebanon.

One day before the Israeli air strikes, the main partners and shareholders of the BTC pipeline project, including several heads of State and oil company executives were in attendance at the port of Ceyhan. They were then rushed off for an inauguration reception in Istanbul, hosted by Turkey’s President Ahmet Necdet Sezer in the plush surroundings of the Ã‡Ã½raÃ°an Palace.

Israel’s Minister of Energy and Infrastructure Binyamin Ben-Eliezer was present at the venue together with a delegation of top Israeli oil officials.

The BTC pipeline totally bypasses the territory of the Russian Federation. It transits through the former Soviet republics of Azerbaijan and Georgia, both of which have become US “protectorates”, firmly integrated into a military alliance with the US and NATO. Moreover, both Azerbaijan and Georgia have longstanding military cooperation agreements with Israel. 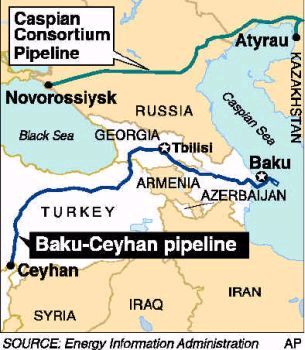 Israel has a stake in the Azeri oil fields, from which it imports some twenty percent of its oil. The opening of the pipeline will substantially enhance Israeli oil imports from the Caspian sea basin.

But there is another dimension which directly relates to the war on Lebanon. Whereas Russia has been weakened, Israel is slated to play a major strategic role in “protecting” the Eastern Mediterranean transport and pipeline corridors out of Ceyhan.

Militarization of the Eastern Mediterranean

The bombing of Lebanon is part of a carefully planned and coordinated military road map. The extension of the war into Syria and Iran has already been contemplated by US and Israeli military planners. This broader military agenda is intimately related to strategic oil and oil pipelines. It is supported by the Western oil giants which control the pipeline corridors. In the context of the war on Lebanon, it seeks Israeli territorial control over the East Mediterranean coastline.

In this context, the BTC pipeline dominated by British Petroleum, has dramatically changed the geopolitics of the Eastern Mediterranean, which is now linked , through an energy corridor, to the Caspian sea basin:

“[The BTC pipeline] considerably changes the status of the region’s countries and cements a new pro-West alliance. Having taken the pipeline to the Mediterranean, Washington has practically set up a new bloc with Azerbaijan, Georgia, Turkey and Israel, ” (Komerzant, Moscow, 14 July 2006)

Israel is now part of the Anglo-American military axis, which serves the interests of the Western oil giants in the Middle East and Central Asia.

While the official reports state that the BTC pipeline will “channel oil to Western markets”, what is rarely acknowledged is that part of the oil from the Caspian sea would be directly channeled towards Israel. In this regard, an underwater Israeli-Turkish pipeline project has been envisaged which would link Ceyhan to the Israeli port of Ashkelon and from there through Israel’s main pipeline system, to the Red Sea.

The objective of Israel is not only to acquire Caspian sea oil for its own consumption needs but also to play a key role in re-exporting Caspian sea oil back to the Asian markets through the Red Sea port of Eilat. The strategic implications of this re-routing of Caspian sea oil are farreaching.

What is envisaged is to link the BTC pipeline to the Trans-Israel Eilat-Ashkelon pipeline, also known as Israel’s Tipline, from Ceyhan to the Israeli port of Ashkelon. In April 2006, Israel and Turkey announced plans for four underwater pipelines, which would bypass Syrian and Lebanese territory.

“Turkey and Israel are negotiating the construction of a multi-million-dollar energy and water project that will transport water, electricity, natural gas and oil by pipelines to Israel, with the oil to be sent onward from Israel to the Far East,

The new Turkish-Israeli proposal under discussion would see the transfer of water, electricity, natural gas and oil to Israel via four underwater pipelines.

â€œBaku oil can be transported to Ashkelon via this new pipeline and to India and the Far East.[via the Red sea]”

“Ceyhan and the Mediterranean port of Ashkelon are situated only 400 km apart. Oil can be transported to the city in tankers or via specially constructed under-water pipeline. From Ashkelon the oil can be pumped through already existing pipeline to the port of Eilat at the Red Sea; and from there it can be transported to India and other Asian countries in tankers. (REGNUM )

Also involved in this project is a pipeline to bring water to Israel, pumping water from upstream resources of the Tigris and Euphrates river system in Anatolia. This has been a long-run strategic objective of Israel to the detriment of Syria and Iraq. Israel’s agenda with regard to water is supported by the military cooperation agreement between Tel Aviv and Ankara.

Diverting Central Asian oil and gas to the Eastern Mediterranean (under Israeli military protection), for re-export back to Asia, serves to undermine the inter-Asian energy market, which is based on the development of direct pipeline corridors linking Central Asia and Russia to South Asia, China and the Far East.

Meanwhile, Israel has emerged as a new powerful player in the global energy market.

Meanwhile, Moscow has responded to the US-Israeli-Turkish design to militarize the East Mediterranean coastline with plans to establish a Russian naval base in the Syrian port of Tartus:

“Defense Ministry sources point out that a naval base in Tartus will enable Russia to solidify its positions in the Middle East and ensure security of Syria. Moscow intends to deploy an air defense system around the base – to provide air cover for the base itself and a substantial part of Syrian territory. (S-300PMU-2 Favorit systems will not be turned over to the Syrians. They will be manned and serviced by Russian personnel.)

Tartus is strategically located within 30 km. of the Lebanese border.

The implementation of a land-based corridor, as opposed to the underwater pipeline project, would require the militarisation of the East Mediterranean coastline, extending from the port of Ceyhan across Syria and Lebanon to the Lebanese-Israeli border.

Is this not one of the hidden objectives of the war on Lebanon? Open up a space which enables Israel to control a vast territory extending from the Lebanese border through Syria to Turkey.

It is worth noting that the US War Academy had already contemplated the formation of a “Greater Lebanon” which would extend along the coastline from Israel to Turkey. In this scenario, the entire Syrian coastline would be annexed to an Anglo-American Israeli protectorate.(See Map of The New Middle East below).

Israeli Prime minister Ehud Olmert has stated that the Israeli offensive against Lebanon would “last a very long time”. Meanwhile, the US has speeded up weapons shipments to Israel.

There are strategic objectives underlying the “Long War” which are tied to oil and oil pipelines.

The air campaign against Lebanon is inextricably related to US-Israeli strategic objectives in the broader Middle East including Syria and Iran. In recent developments, Secretary of State Condoleeza Rice stated that the main purpose of her mission to the Middle East was not to push for a ceasefire in Lebanon, but rather to isolate Syria and Iran. (Daily Telegraph, 22 July 2006)

At this particular juncture, the replenishing of Israeli stockpiles of US produced WMDs points to an escalation of the war both within and beyond the borders of Lebanon. 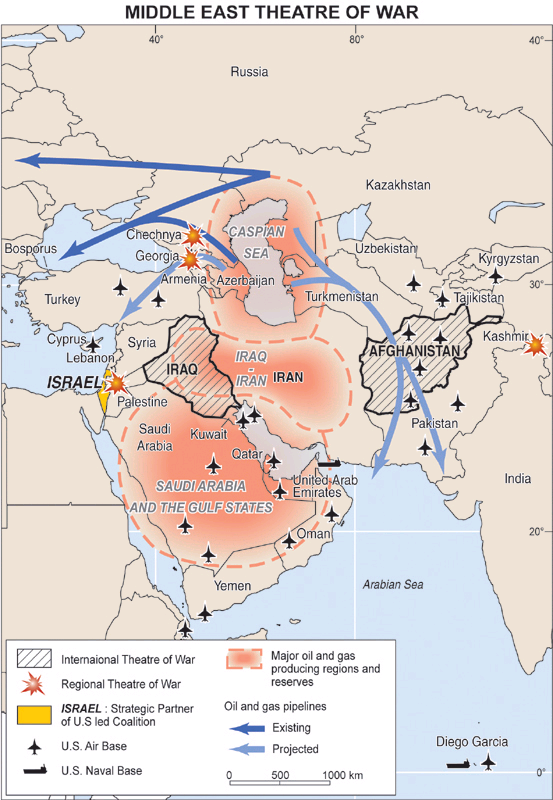 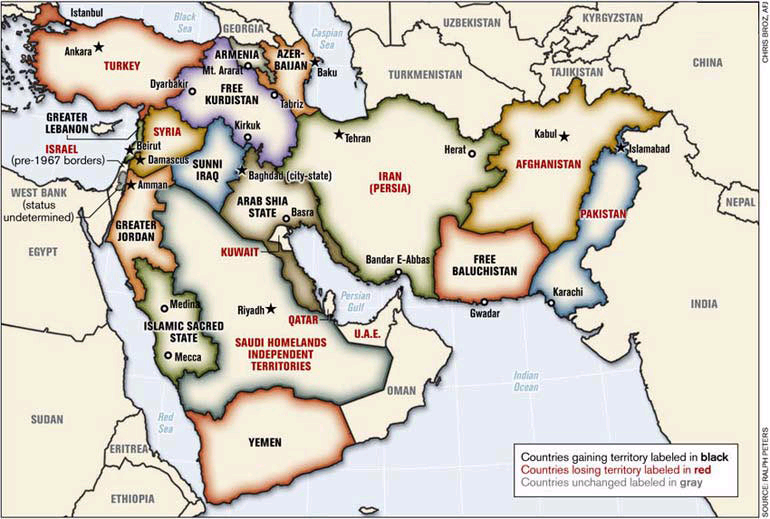 Michel Chossudovsky is the author of the international best seller “The Globalization of Poverty ” published in eleven languages. He is Professor of Economics at the University of Ottawa and Director of the Center for Research on Globalization, at www.globalresearch.ca . He is also a contributor to the Encyclopaedia Britannica. His most recent book is entitled: Americaâ€™s “War on Terrorism”, Global Research, 2005.

We use cookies to ensure that we give you the best experience on our website. If you continue to use this site we will assume that you are happy with it.Ok